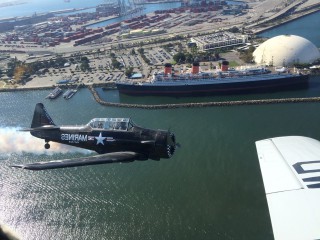 As part of The Queen Mary’s ongoing Community Service Salon Series, an impressive salute to those of the Greatest Generation who served in WWII will be held. The event will also include a WARBIRD Fly-over and aerial demonstration above the ship.

The WWII Salute serves a timely reminder of a significant period in history and to those who lived it. The Queen Mary served as a troopship during the War and was nicknamed “Grey Ghost” because she safely ferried over 800,000 Allied personnel to war fronts around the world. A bounty was placed on the Queen Mary by Nazi U-boats; none of which came close.

“War Dog,” a restored North American AT-6/SNJ WII trainer piloted by longtime aviator, John Collver, will be joining war re-enactors and others on the ship that day. Central to most air combat training programs, this magnificently restored AT-6 plane will perform its combat ballet at 5:30 p.m. just a few hundred feet above the Queen’s deck. Reaching speeds of 200 mph, the sound of a war-bird flying overhead is something you don’t want to miss.

Where Bob Hope once debuted his wartime comedy routines, The Queen’s Salon will host WWII re-enactors and present historic memorabilia displays along with footage of The Queen Mary during WWII. The California Historical Group will bring to life the sounds and feels of the 30’s and 40s through popular tunes, swing dancers, and vocal performances.

With activities running from 3-8 p.m. admission to the ship and the WWII Salute will be complimentary after 3 p.m. Glory Days Tour and a new 4D Theater Movie will be $5. Parking is $10 after 3 p.m. Cash bar and food concessions will be available for purchase on the Promenade Deck.