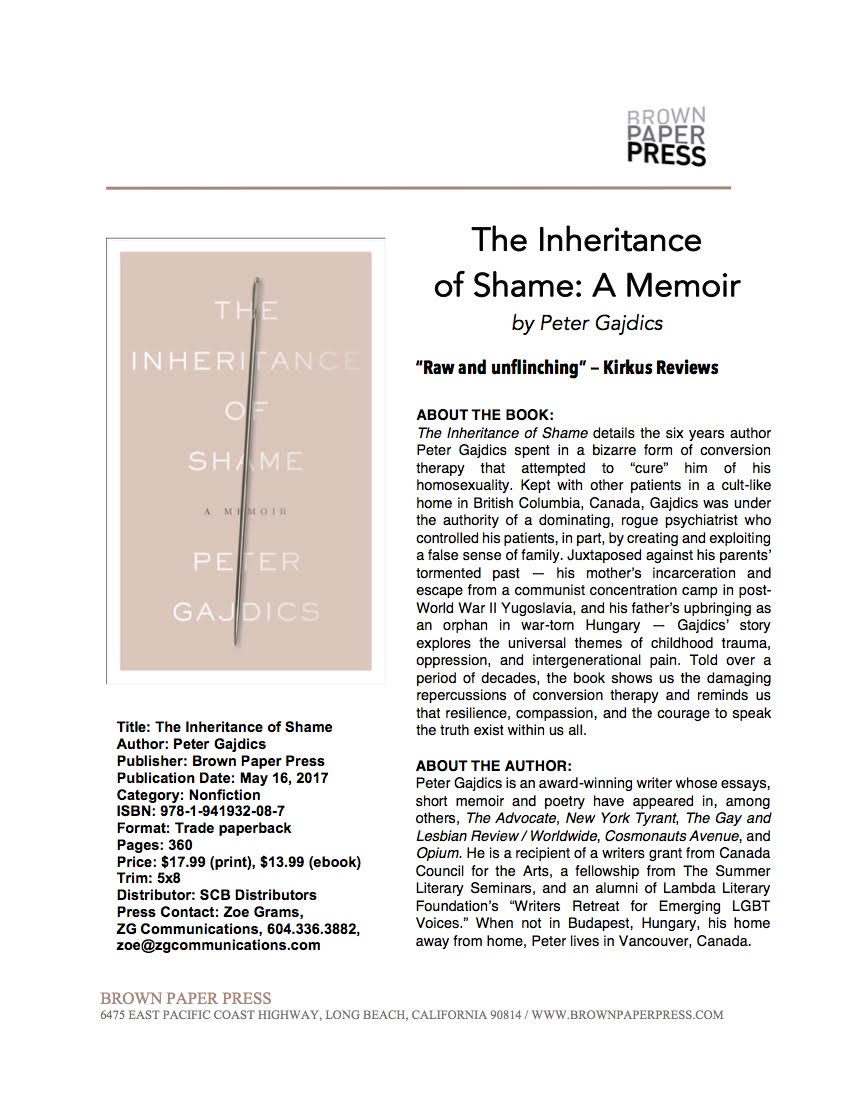 Gajdics was raised in British Columbia by a mother who survived a communist concentration camp and a father who was orphaned as a child in war-torn Hungary. Their Catholic faith, which grew stronger after their move to Canada, led them to reject their son’s homosexuality — a rejection that ultimately drove Gajdics, then in his early 20s, to seek help from a psychiatrist. Instead of finding solace, however, the author found himself in a cult-like atmosphere, medicated, and undergoing an experimental form of primal therapy that sought to regress him emotionally to a childlike state so that he could be “re-parented” in a supposedly healthy way. This, his doctor informed him, would “cure” him of his homosexuality.

The memoir is published by Brown Paper Press, which will host a launch party at Fingerprints, 420 E. 4th St. in Long Beach, on May 16 — the official date of the book’s publication. The launch will feature a book reading and signing, as well as live music by the folk duo Bearcoon and a wine reception hosted by Berlin Bistro.

Two days later, on May 18, the author will appear for Pride Night at the Art Theatre of Long Beach, 2025 E. 4th St., for a special screening of Call Me Kuchu, an award-winning 2012 documentary about openly gay activists in Uganda working to defeat legislation that would make homosexuality punishable by death. After the screening, the author and Ellen Hartwick, clinical director of The LGBTQ Center Long Beach, will discuss the film as well as a range of related topics.

Finally, on May 19, Gajdics will appear in conversation with Santa Monica novelist Dan Lopez at Book Soup, 8818 Sunset Blvd, in West Hollywood. Lopez is the author of The Show House (2016, Unnamed Press), a mystery that merges murder, passion, family and ideas of what it means to be gay in contemporary society.

The three LA events all start at 7 p.m. and kick off Gajdics’ West Coast tour, which includes stops in Oakland, San Francisco, Portland, Seattle and, finally, his native Vancouver.

“Peter’s story is bigger than his own remarkable experience,” said Jennifer Volland, co-publisher of Brown Paper Press. “His book explores how trauma can pass from one generation to the next, and how deep-seated shame, no matter how misplaced, can lead people to abandon their true selves. Anyone who has ever felt oppressed or has experienced childhood trauma will relate to the author and his story, regardless of their sexuality.”

The book’s subject matter is particularly timely as church-funded conversion programs continue to gain support among regional and national figures, and the Trump Administration has begun rolling back LGBTQ+ rights. Conversion for minors is prohibited in California and seven other states — including New Mexico, which passed its ban just this month. But 42 states still allow these programs, despite overwhelming evidence of the psychologically damaging effects they have on young people.

Gajdics said he hopes his book might serve as a call to action to put anti-gay therapies out of business once and for all.

“At a time in history when a change of government and a strike of the pen could rescind legal decisions and set human rights back decades,” he said, “I remind myself that perhaps now more than ever the world needs true-life stories, road maps, and an empathetic voice from those who’ve gone before.”

In reflecting on his own journey to complete the memoir, Gajdics added: “Writing this memoir was an act of survival — an act of defiance against the effects of silence. I’m grateful to have the opportunity to speak when so many others, by default, endure other forms of this experience in silence.”

"Fences" at the Long Beach Playhouse