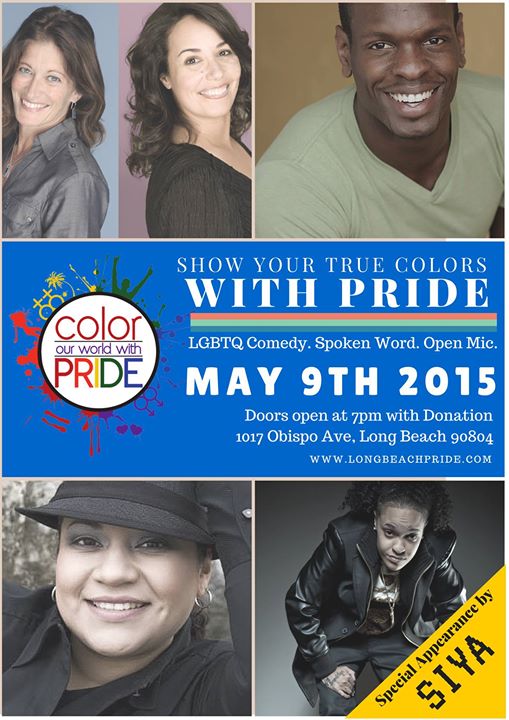 “Show Your True Colors with Pride, is a night of comedic relief and passionate spoken word voices; a first of its kind to be fully produced by the Long Beach Pride organization that invites the community to show us your talents, passion and pride through artistic vibes.

Excited to have a cast of diverse features that have opened for Margaret Cho, Rosie O’Donnell, to “Curve Magazine top 10 Lesbian comics”, Logo TV, to Showtime, MTV, and the talent of a spoken word author that tackles taboo subjects who works with at-risk youth. There will also be music and door prizes along with great camaraderie.

Join us for a meet and greet with the members of Long Beach Pride and share a song, poem or joke during our open-mic session.

Hope to see you there!”

Free Event, and there will be door prizes with donation. Open Mic available, please sign up the day of when you arrive.

Diana Yanez cuban-american comedian who’s opened up for Margaret Cho, Rosie O’Donell and gone on tour with the “Gay Mafia” and “Queer on their Feet” crews.

Jennie McNulty has been on MTV Network’s LOGO TV channel in a comedy special called, “One Night Stand Up.” She has traveled the world doing comedy – literally. In addition to headlining in comedy clubs all over the US and Canada, she has entertained the troops in Iraq and Afghanistan. She also does comedy in more peaceful settings as one of the favorites of Olivia Cruises and Resorts

Raneir Pollard who is a regular performer at The World Famous Comedy store and has appeared at other popular Los Angeles Comedy Clubs such as The Hollywood Improv, The Laugh Factory and Flappers Comedy Club.
He can currently be seen as a feature on the Showtime Stand Up special “Pride Comedy Jam.”

Cyn da’ Poet who is an author and poet that works with at-risk youth in teaching them how to use poetry as a healing tool. CYN GONZALEZ

For more info on other Pride Week events and details on festival: www.longbeachpride.com