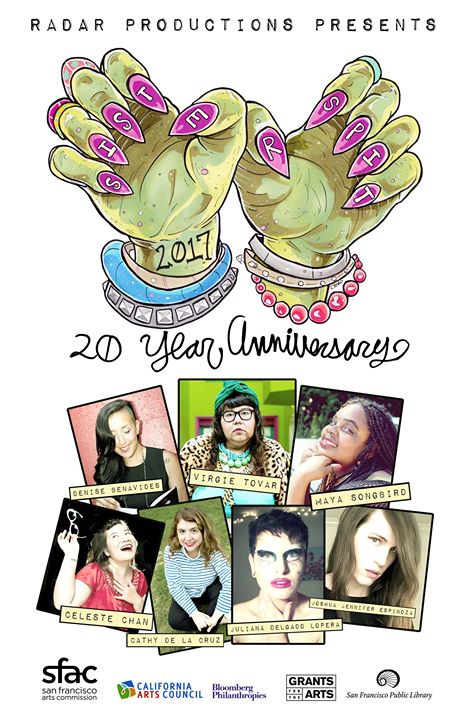 The LGBTQ Center of Long Beach is proud to host the queer spoken word showcase Sister Spit FREE for the sixth year in a row! Big thanks to our wonderful co-host ArtExchange – ArtX. We’ll have beer and wine for sale and tons of resource tables on hand to connect with some other organizations doing amazing work in the city! This event is supported in part by Arts Council for Long Beach and the City of Long Beach.

Celebrating 20 Years on the Road…
In 2017 Sister Spit celebrates its 20th anniversary. Sister Spit began in San Francisco in the 1990s as a weekly, girls-only open mic that was an alternative to the misogyny-soaked poetry open mics popular around the city (and the nation) at that time. Inspired by two-bit punk bands who managed to go on the road without hardly knowing how to play their instruments, Sister Spit became the first all-girl poetry roadshow at the end of the 90s, and toured regularly with such folks as Eileen Myles, Marci Blackman, Beth Lisick and Nomy Lamm.

The tour was revived as Sister Spit: The Next Generation in 2007, and has toured the United States annually since, with authors and performers such as Chinaka Hodge, Dorothy Allison, Lenelle Moise and Justin Vivian Bond. In this next incarnation, out of respect to the changing gender landscape of our queer and literary communities, Sister Spit welcomes artists of all genders, so long as they mesh with the tour’s historic vibe of feminism, queerness, humor and provocation.