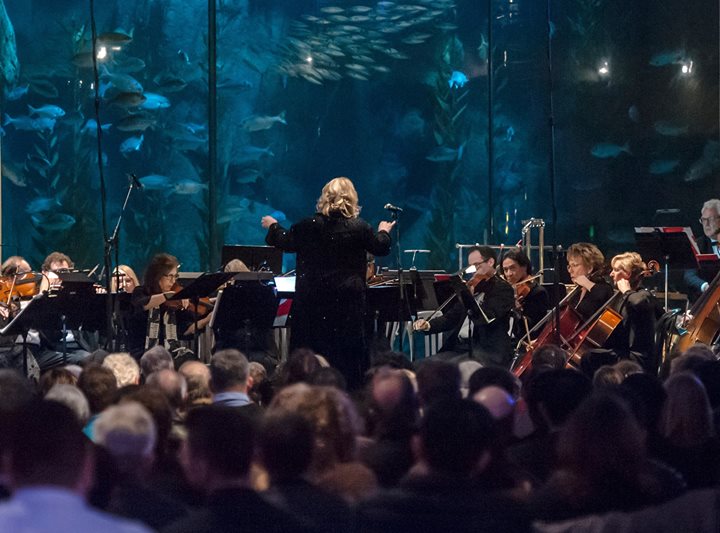 The Aquarium of the Pacific invites you to join us for a special evening of pops music and a picnic dinner to celebrate the ocean with the Musique Sur La Mer string orchestra under the direction of Marcy Sudock.

Among the pieces performed will be Pacific Visions, an original composition for a string orchestra commissioned by Dennis and Suzanne Poulsen to celebrate the Aquarium’s expansion of the same name.

Musique Sur La Mer Orchestras (MSLMO) was founded in 2001 by music director, conductor and violinist, Marcy A. Sudock. Their mission is to empower musicians, serve humanity and create peace through the international language of music aimed to work hand in hand with strong ethics, responsibility, musicality, education, passion and commitment.

Locally based in the Long Beach/Seal Beach area of Southern California, MSLMO performs locally and travels extensively around the globe performing concerts that aim to inspire and sustain, raising money for charities. Musique Sur La Mer Orchestra performed in London in the Amaryllis-Flemming Concert Hall of the Royal College of Music as the American tribute in honor of the wedding of HRH Prince William and Catherine Middleton and in honor of the Diamond Jubilee of HM Queen Elizabeth II. Musique Sur La Mer Orchestras have performed for sold out audiences in Vienna’s Musikverien-Saal (Austria), the Royal Cathedral of Monaco (Monaco), the Esterhazy Palace (Austria), the Salzburg Cathedral (Austria), the Sydney Opera House (Australia), the Teatro Nacional (Costa Rica) and the Disney Concert Hall (Los Angeles, CA).

COST
Tickets are $50 per person. Reservations required by May 28. Picnic dinner included in ticket price.